Community Playground design which is modern, colourful and inspiring

In early 2017 Playscape Playgrounds were approached by a committee that was formed from a desire to provide a modern, varied play area for the Children of Greetham village and the surrounding area.

They had a very tired playground that had seen better days but had provided lots of fun for the previous generation. Now it was time for something modern, colourful and inspiring.

The brief was far from simple - it must have inclusive elements, a range of textures and colours, an area designated for use by under 5's and equipment to captivate and entertain those older children too - oh and it MUST have a zip wire ! The children of the village had spoken !

Playscape Playgrounds set to work designing a scheme that not only ticked all of the boxes but worked for the budget. Meanwhile the committee were busy fund raising and grant sourcing.

It is important that everybody knows what is happening and where the money will be spent so after many meetings and site visits, plans were finalised and a start date was pencilled.

The committee had done and was doing a wonderful job securing the funding they needed to provide such a fantastic new facility and at the beginning of May 2018 we began to remove the old equipment in order to level the site and make way for the new.

Play equipment and old safety surfacing was disposed of, mounds were levelled, weeds removed and bushes trimmed back. The place no longer looked like a childrens play area but we were making way for something fantastic. Regular meetings with the committee throughout the process kept them informed of what was happening and what they should expect to see.

Over the next few weeks, Playscape Playgrounds installed a 30m zip wire, an inclusive, wheelchair accessible roundabout, a cone spinner, a balance board, a three tower climbing frame with slide and tunnel and rope bridge, a basket swing and flat seat swings, an underground tunnel built into part of the existing, remaining mound and a set of musical chimes in bright colours for children of all abilities to use.
We also created a separate, fenced off area to incorporate the under 5's equipment which included a toddler tower, springers, slide and mother and baby swing. The under 5's area incorporated a dinosaur theme which was bright and colourful with a resin bound rubber safety surface throughout. There are Playscape Playgrounds supplied and manufactured picnic benches for parents to sit awhile whilst the children play and enjoy themselves as well as child sized ones for those wanting to enjoy a picnic with friends.

Throughout the play area, Playscape Playgrounds used different materials for the safety surfacing around the equipment, including grass mats that allow the grass to grow through so that you do not know they are there and resin bound rubber in autumnal colours that blend well with the rural countryside village setting.

The play area opened at the end of July but the official grand opening was at the beginning of September 2018 where the press gathered and even Spiderman turned up to welcome the children into their new park with sweets and photo opportunities. 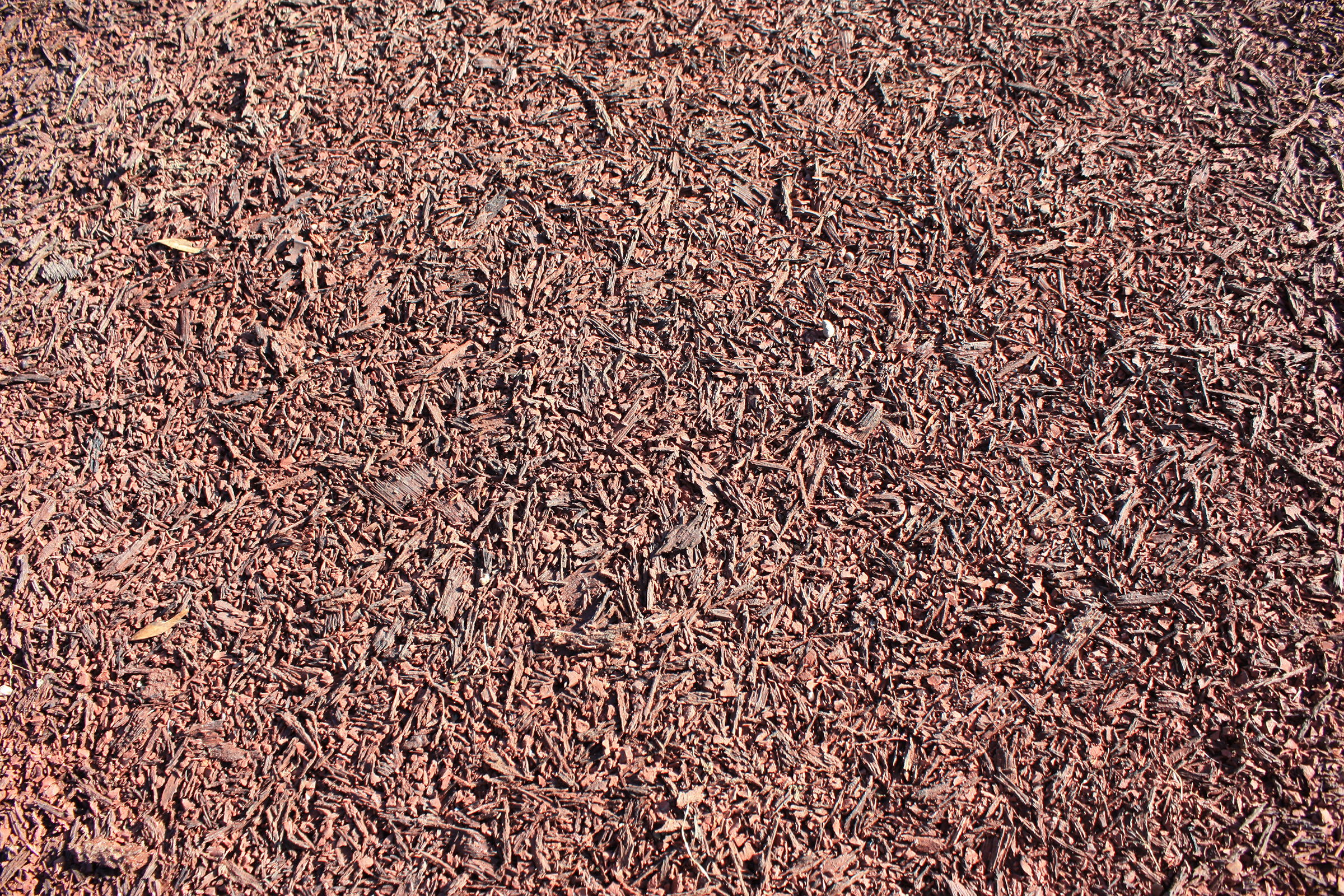 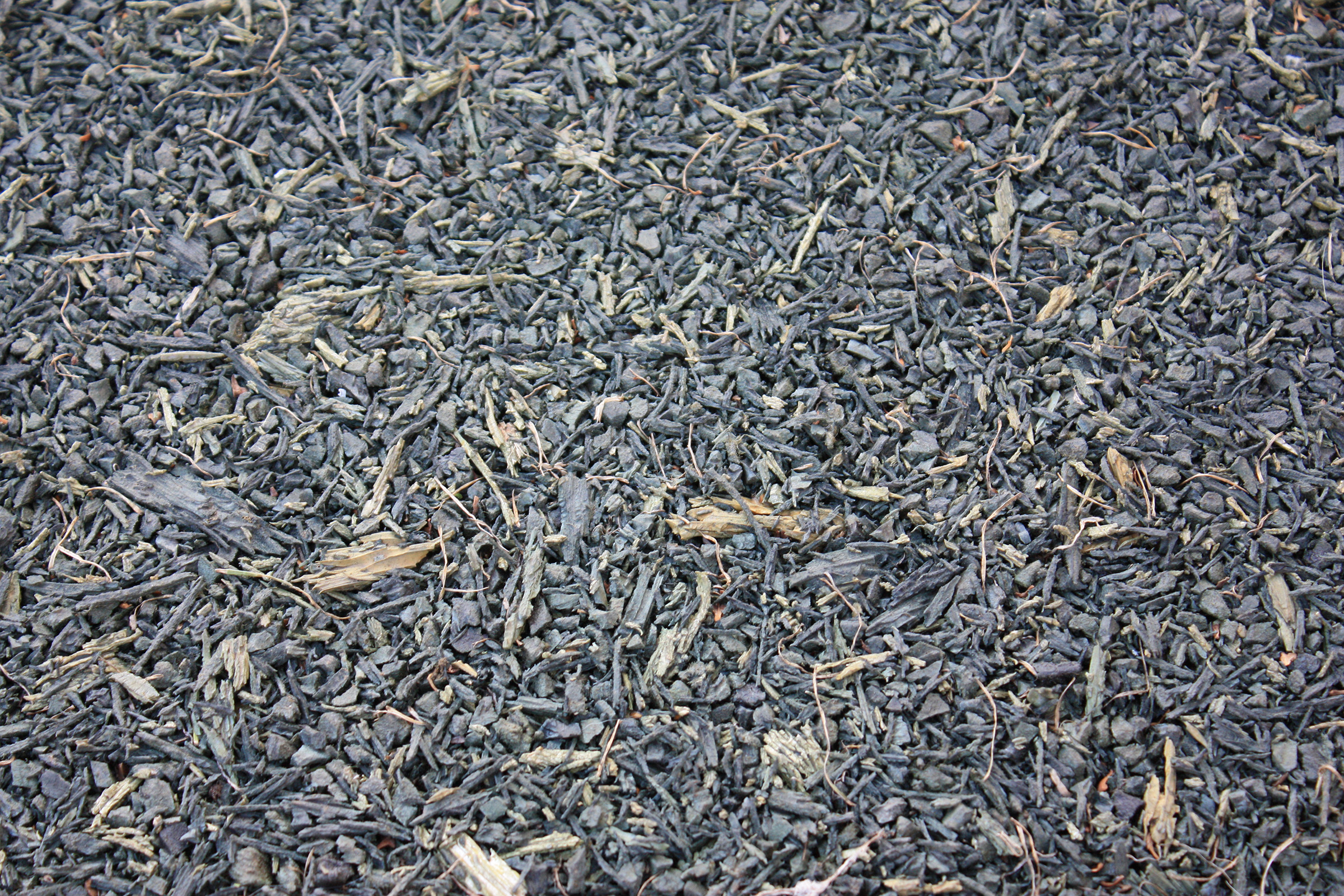 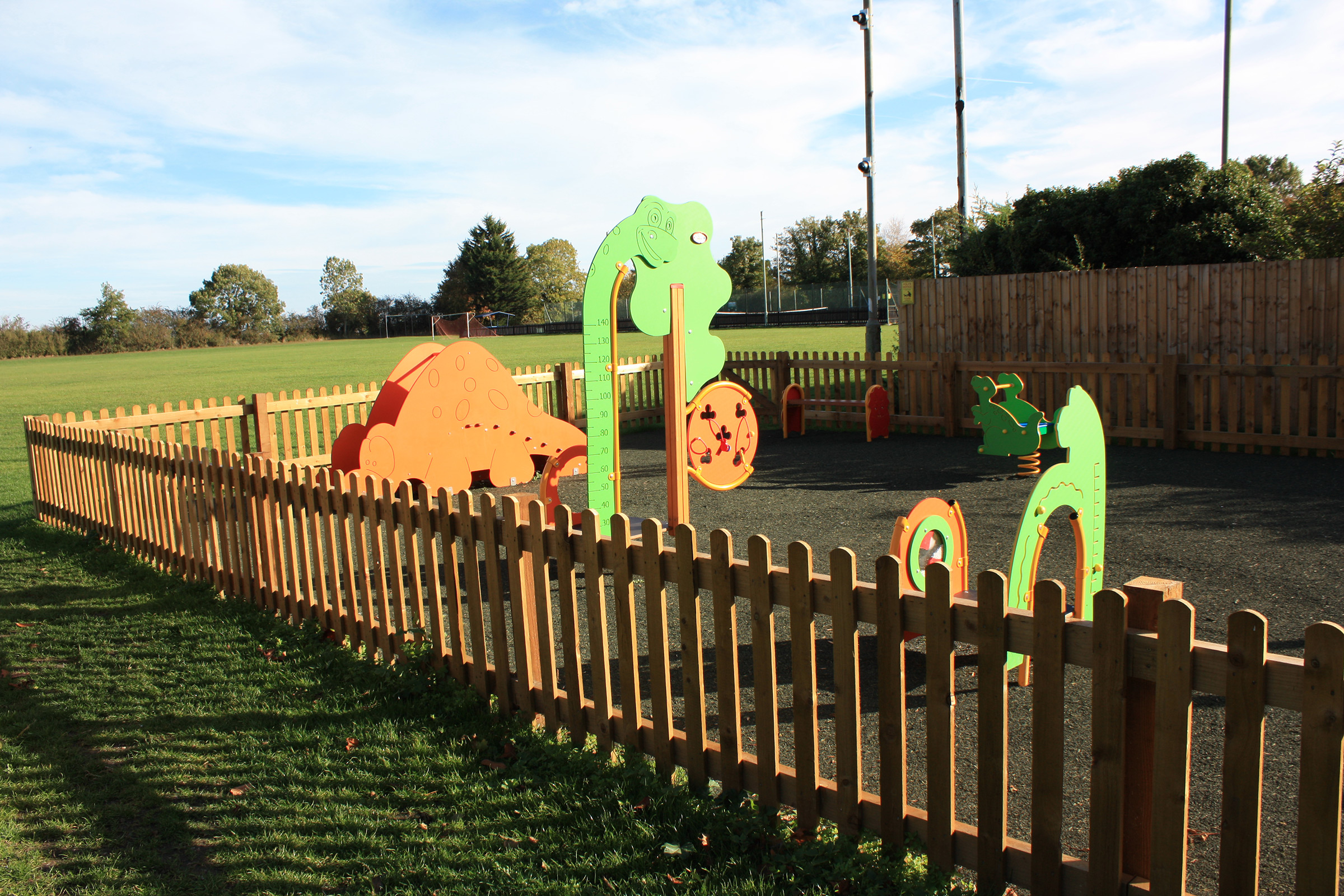 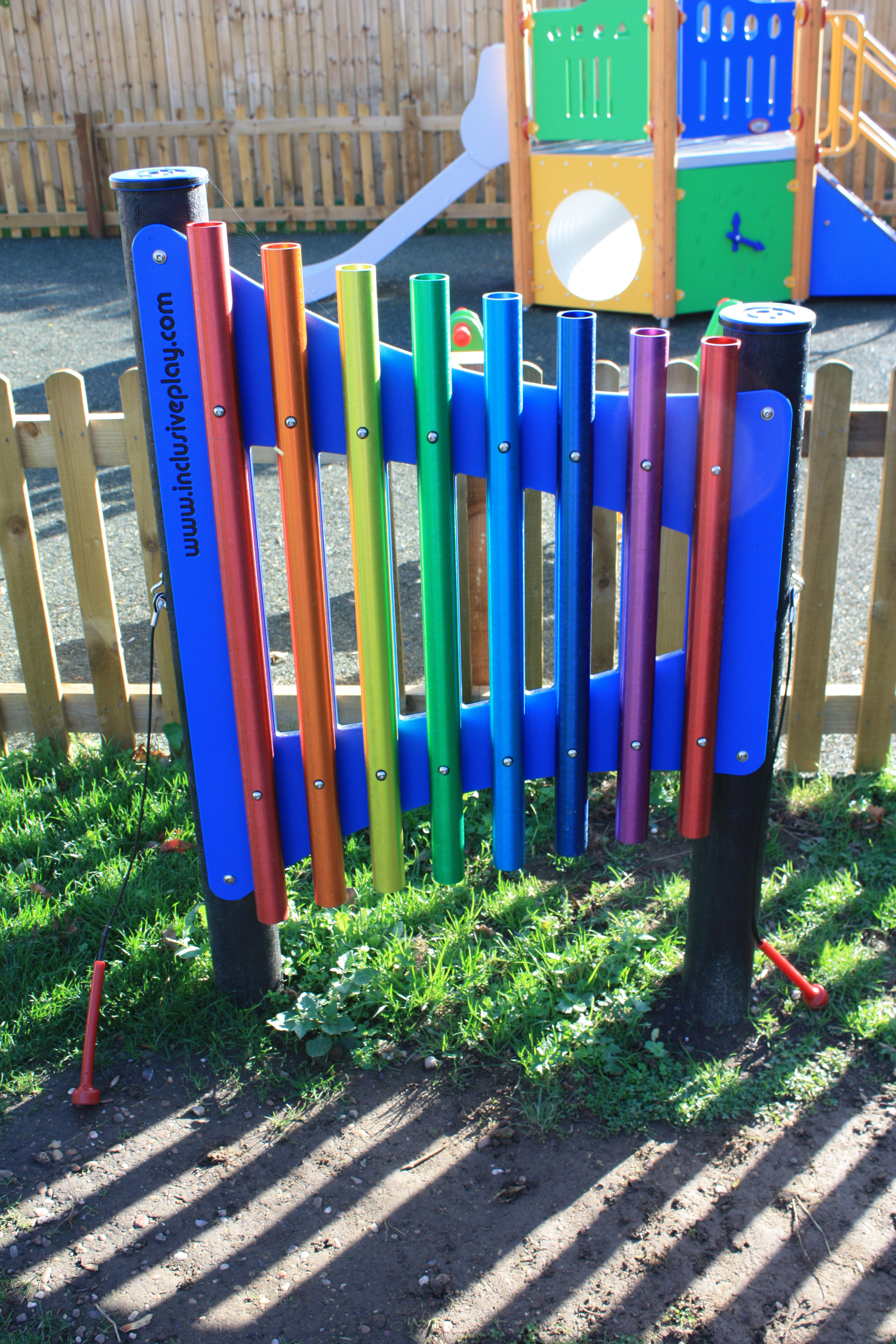 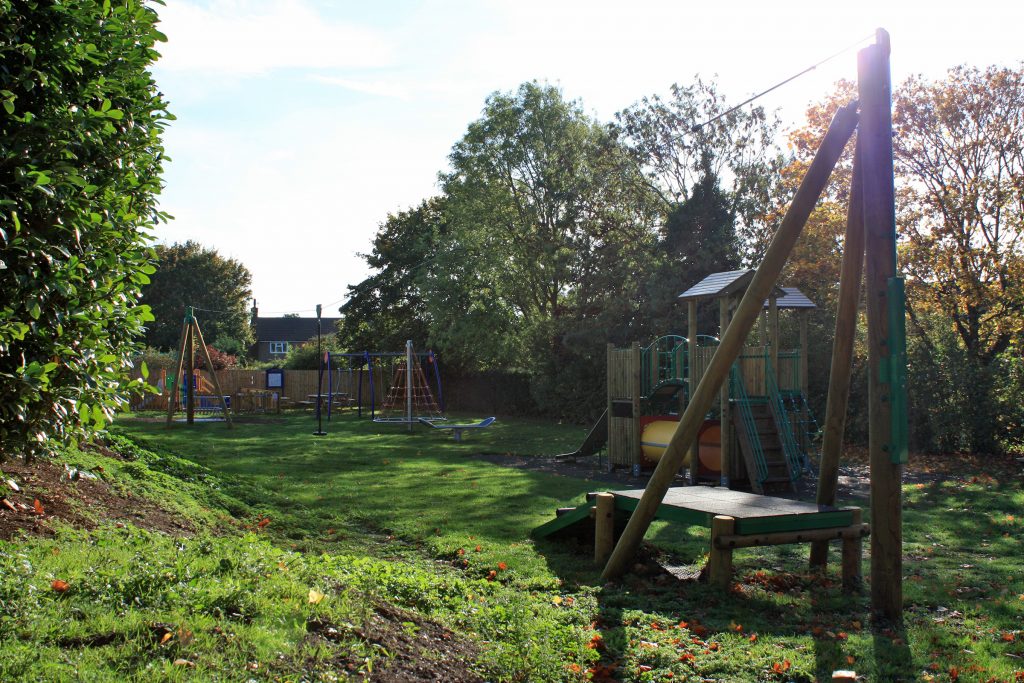 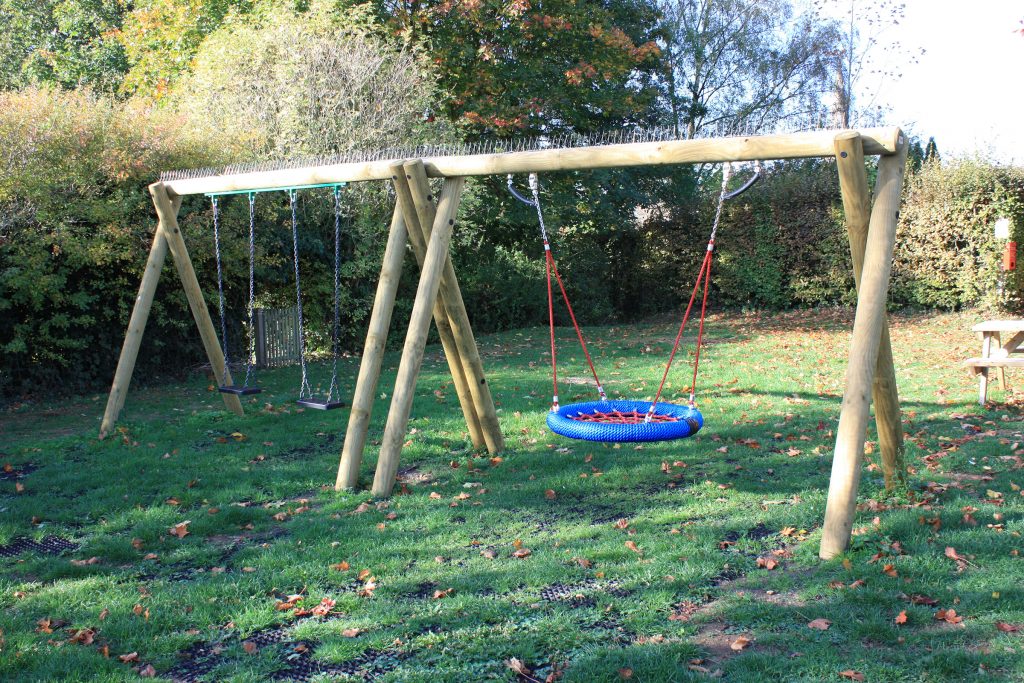 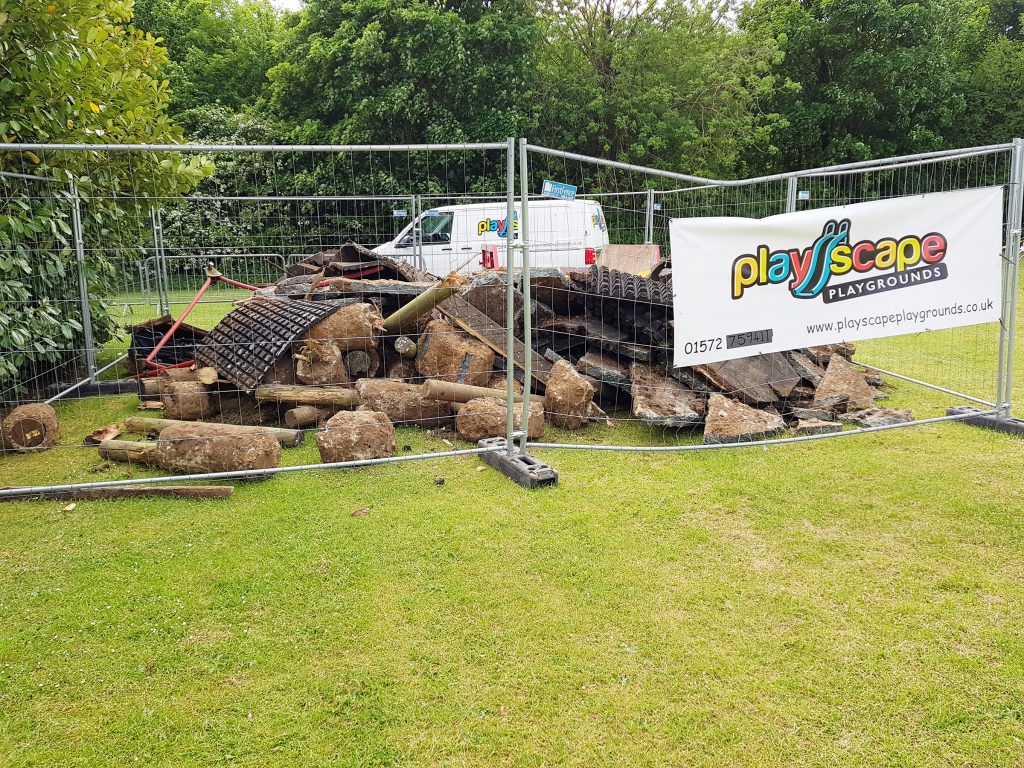 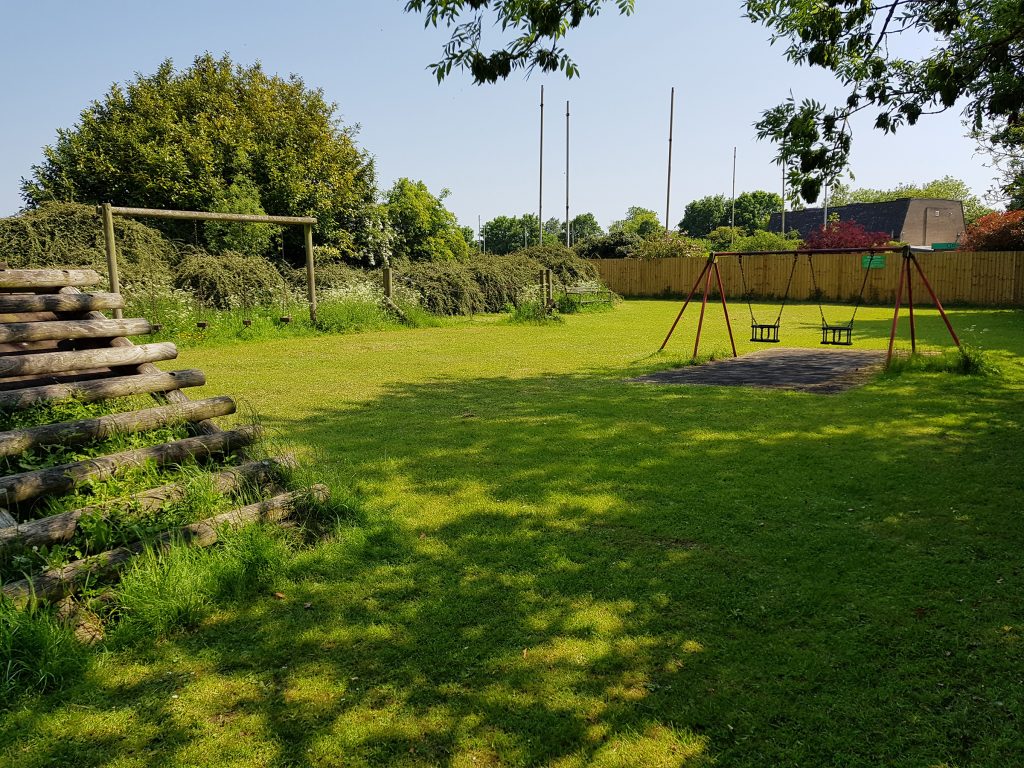 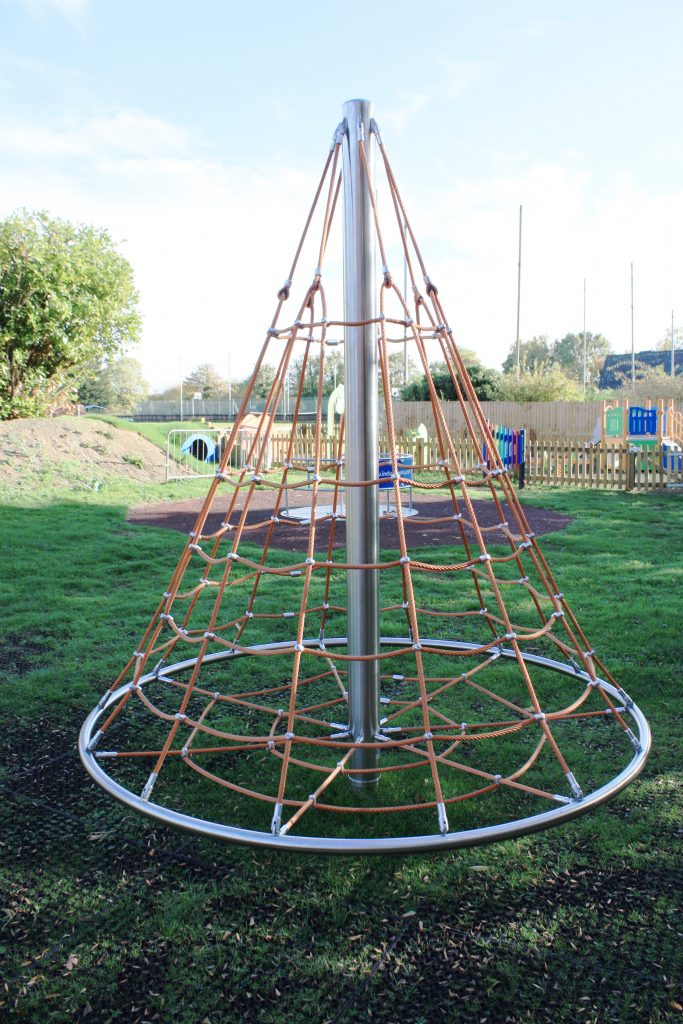 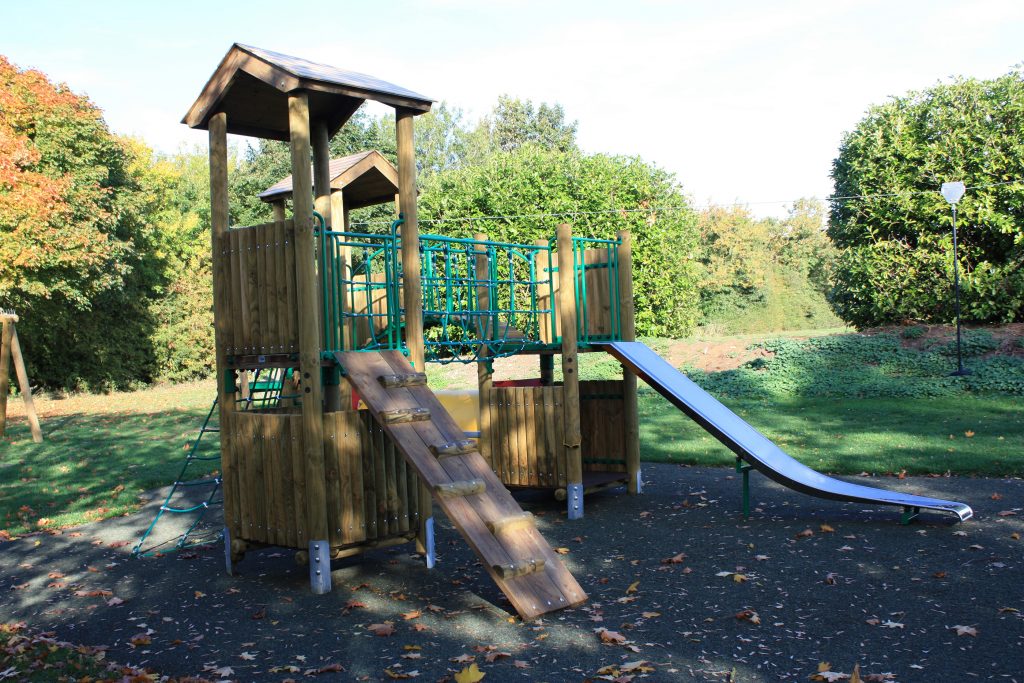 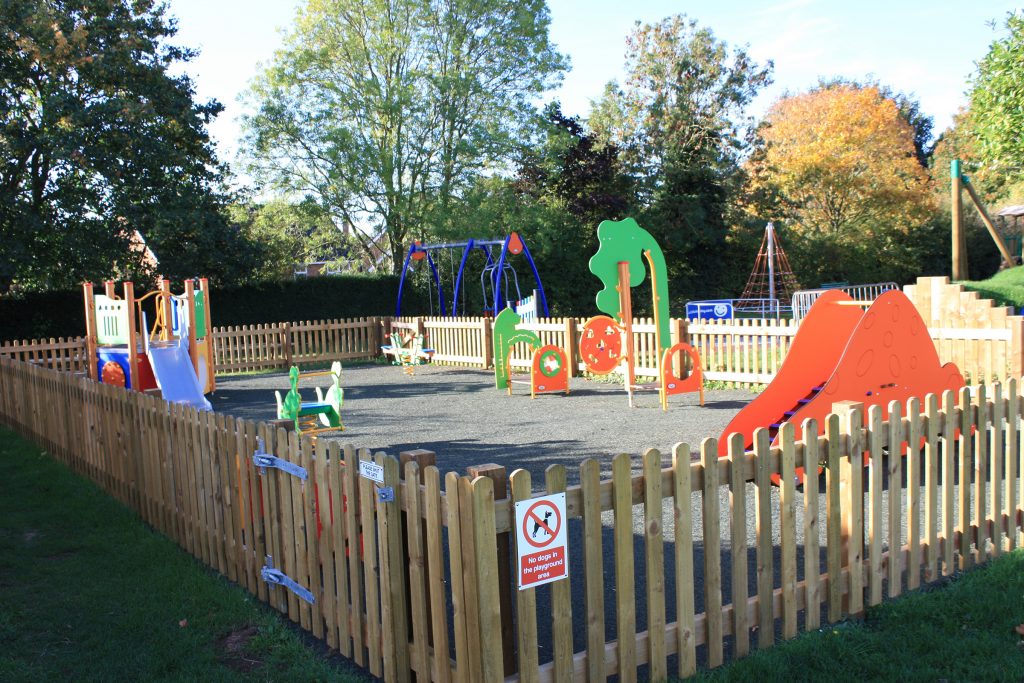 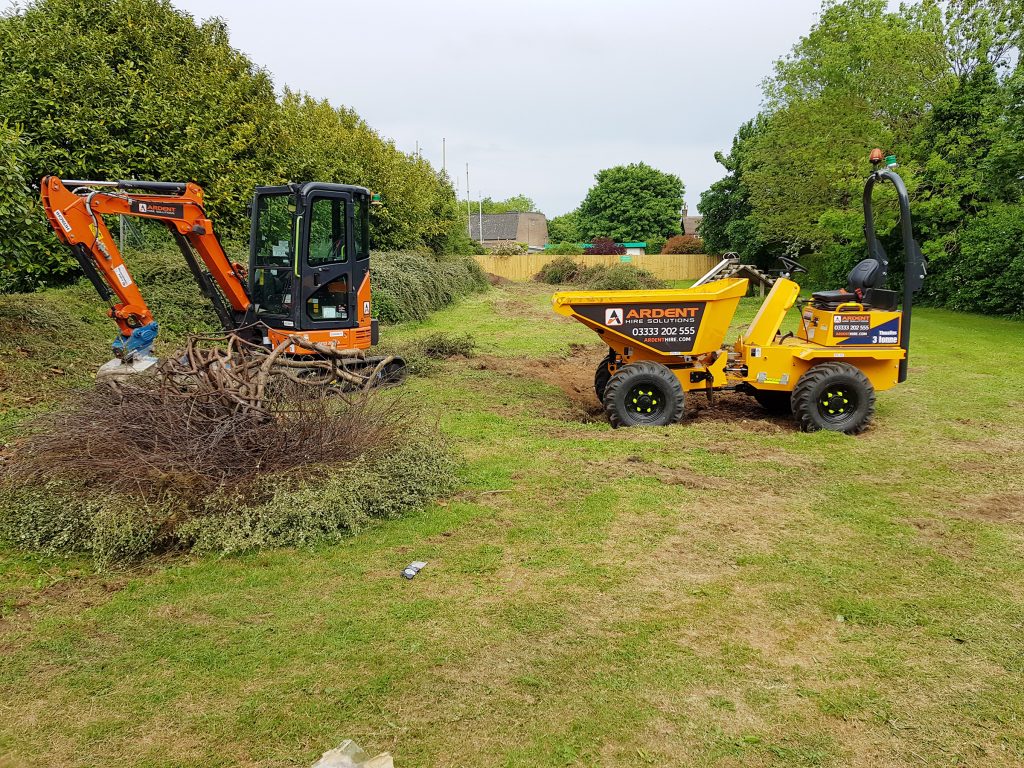 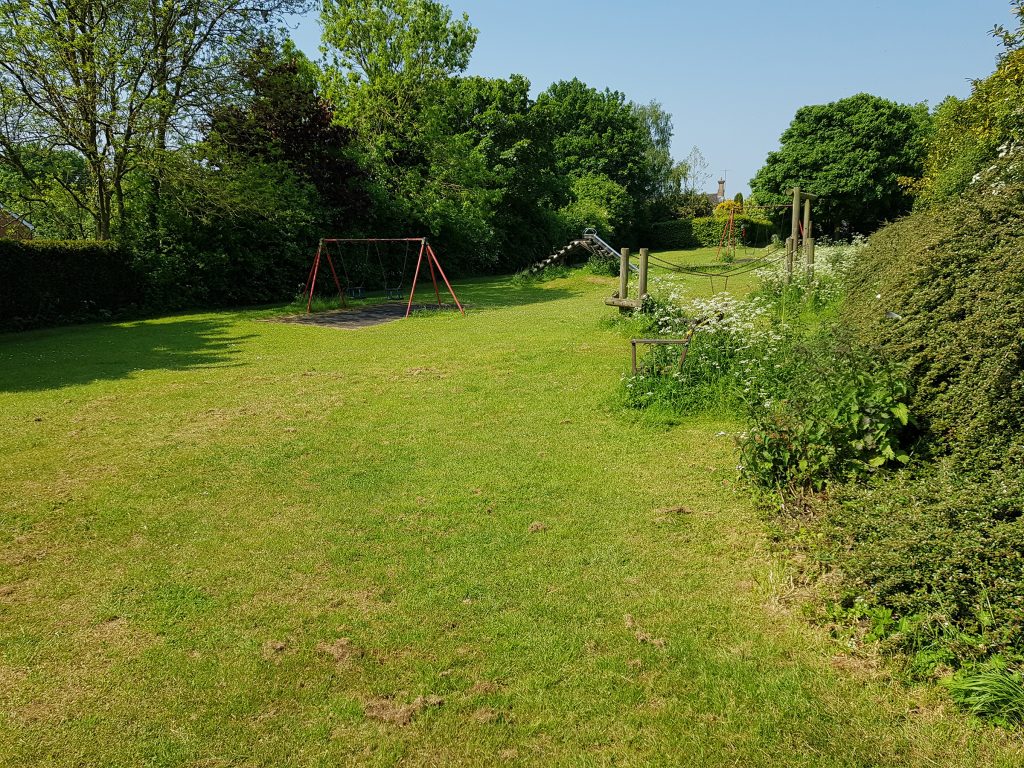 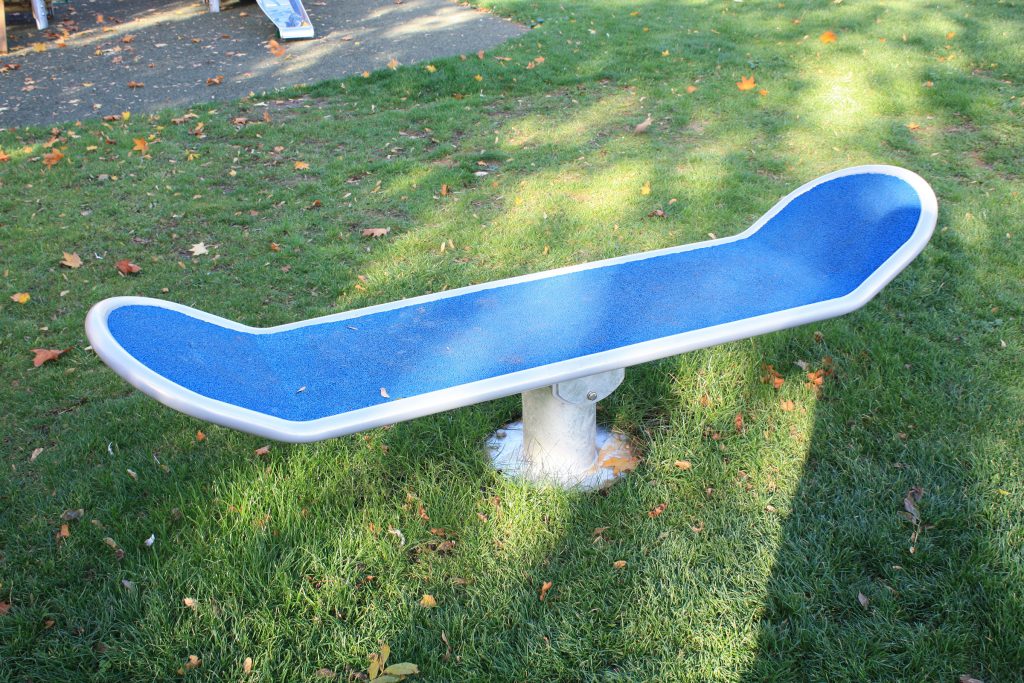 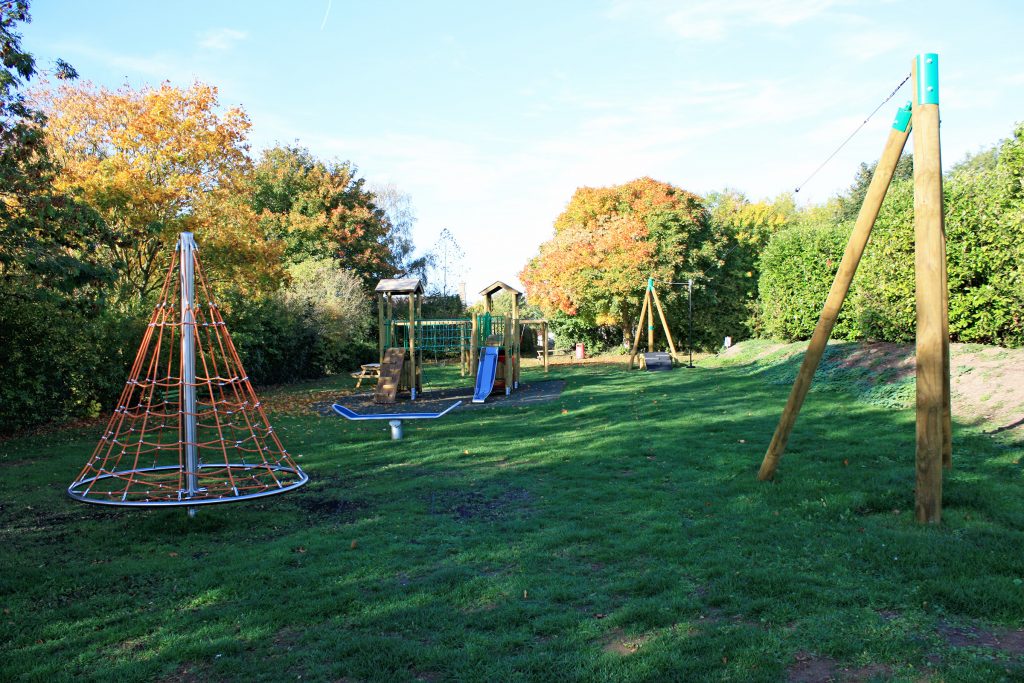 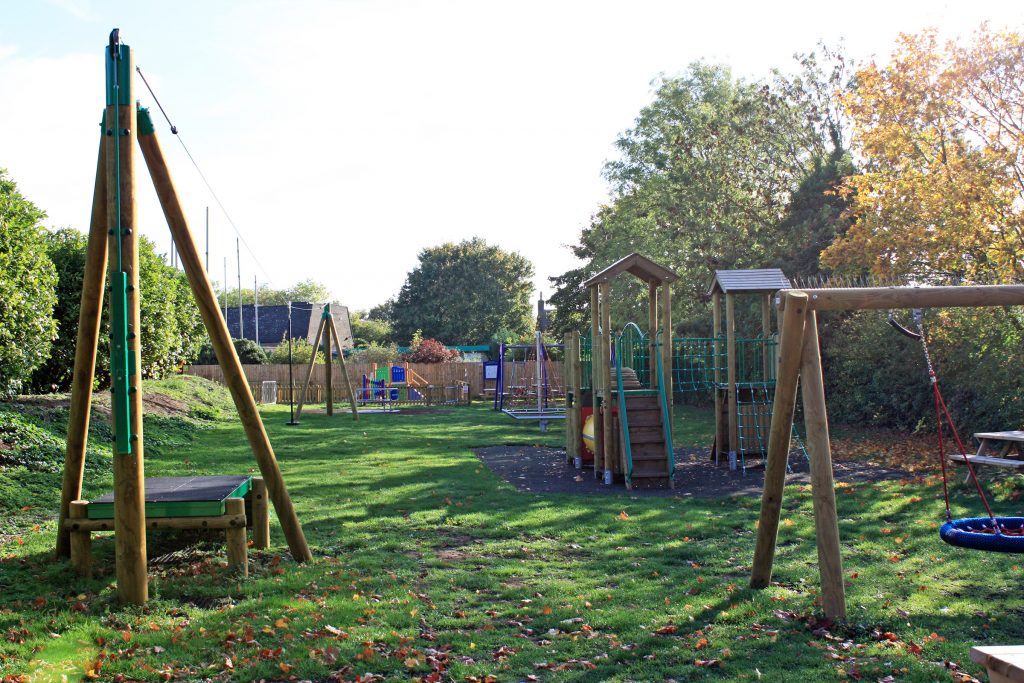 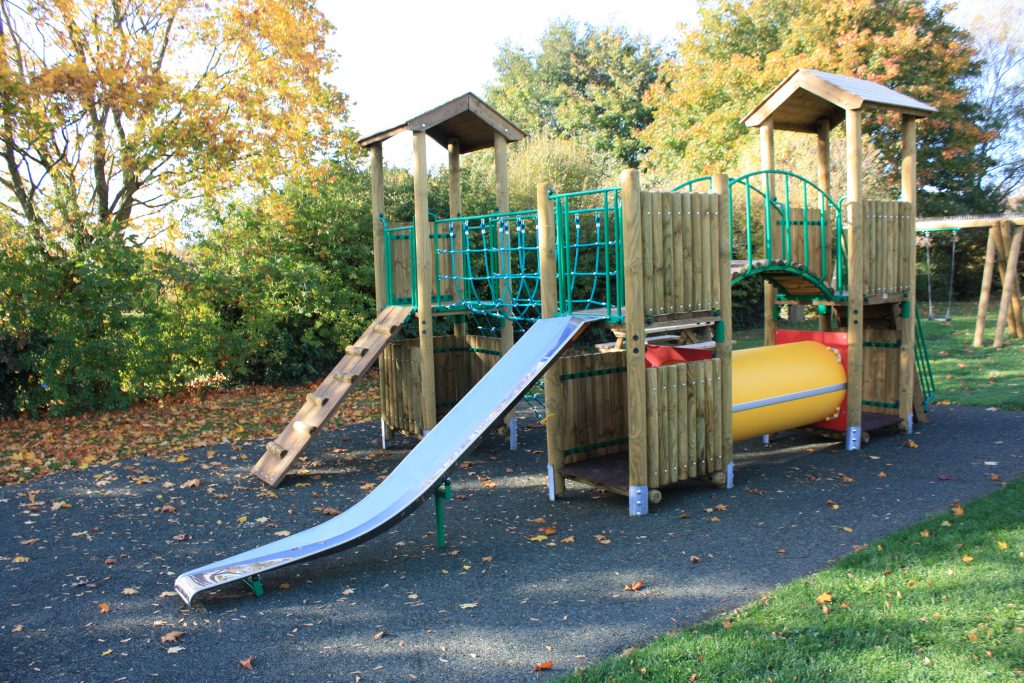 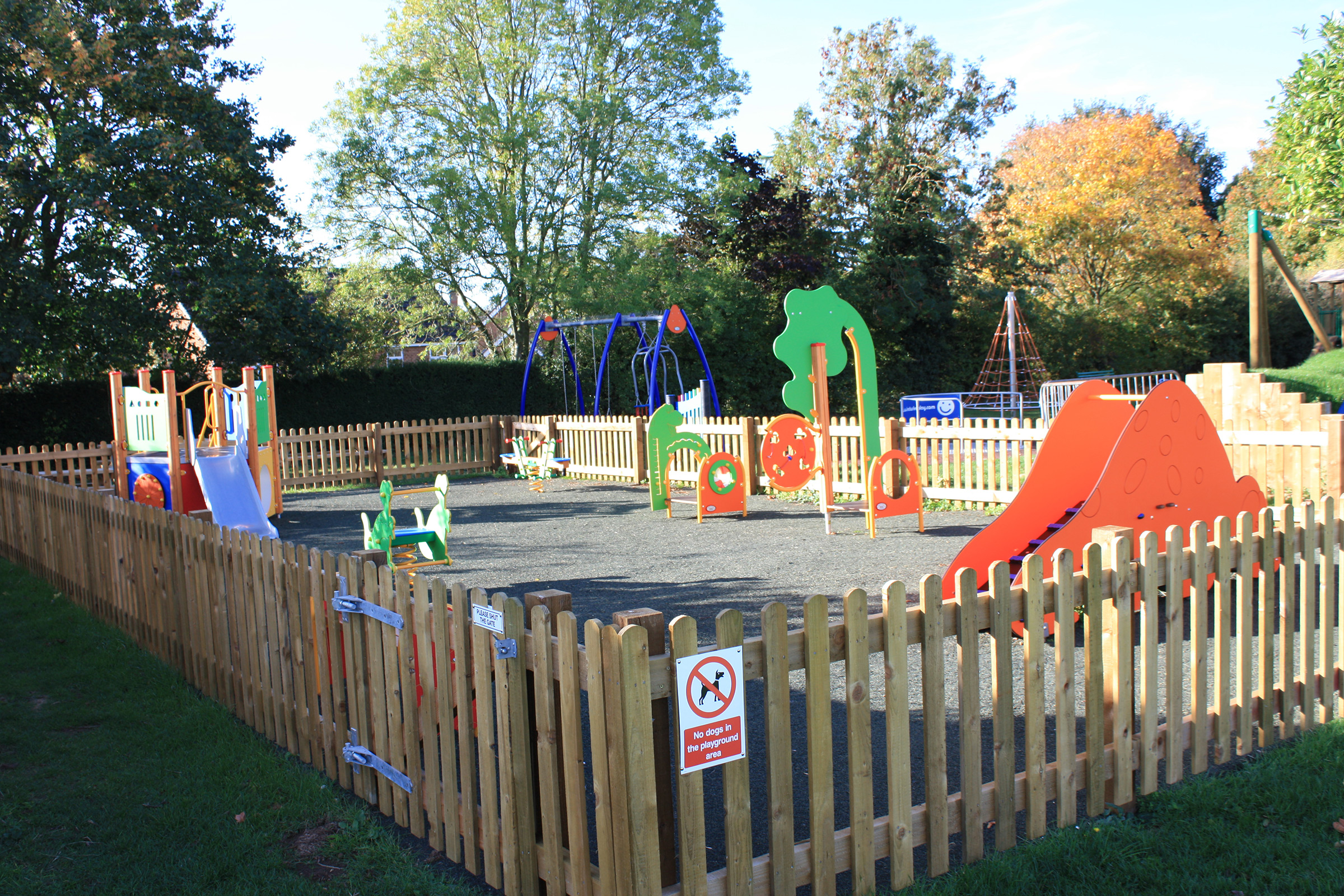